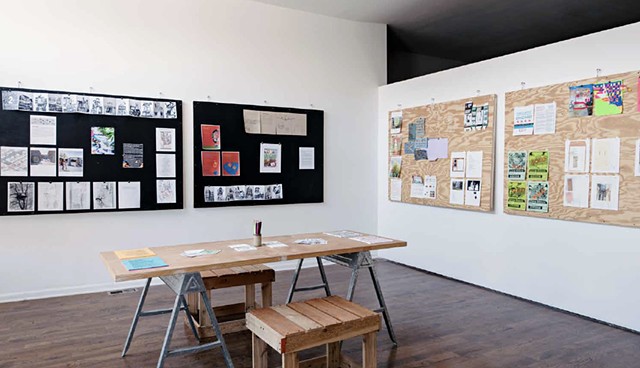 Standards Variance enlists the creative thinking of artists and non-artists alike to imagine alternative notions of urban space that are perhaps more egalitarian, useful, critical, inclusive, accessible, or progressive, while at the same potentially utopian, whimsical, anti-commercial, experimental, absurd, far-fetched, etc. The proposals needed not consider any limitations in budget, zoning, availability of space, feasibility, or the laws of physics. We recognize, embrace, and indeed hope that this would yield a wide variety of incongruent or conflicting proposals, whose differences would reflect something of the diversity of our communities as well as the different modes of commitment to them.

Organized by Brandon Alvendia and Greg Ruffing. Standards Variance is a group show of speculative proposals around what is possible for urban space (empty lots, abandoned buildings, storefronts, green-space, etc.) in Chicago.

What would it look like? What would happen there? How would it function? What needs or wants might it help fulfill that perhaps aren’t currently being addressed?

Standards Variance considers what the future might hold for urban space in this new era of volatile market optimism, political turbulence, and widespread uncertainty. It seeks to open a discussion around speculation of land, resources, and real estate – typically centered on economic outcomes and future profit potential – toward a more expansive and inclusive set of concerns derived from a grassroots level. This project is not necessarily against development – but it is, in many ways, anti-developer.

The participants were invited to devise alternative forms of “speculation” that are rooted in a local right to self-determination: the latent desires, aspirations, and needs of communities. Such perspectives are often overlooked, ignored, or given lip-service in top-down, bureaucratic urban planning and “placemaking” – where real estate developers, planners, markets, and governments are not adequately accountable to residents. This unjust lack of voice becomes especially devastating in the many urban neighborhoods dealing with gentrification and displacement.

The centerpiece of Standards Variance is an installation of 30+ speculative proposals mounted around the gallery on custom-built displays. A rotating selection of the proposals will be visible in the storefront's large picture windows, subtly mimicking the property listing arrays often hung grid-like in realtor office windows. Supplementing these displays will be a modest library of source material available to peruse, as well as takeaway objects collected specifically for this exhibition. Opportunities will also be provided for visitors to craft their own responses and proposals into the mix. At the close of the exhibition, a digital publication, complete with essays by the organizers, will be released to document all the proposals and other content generated during the run of the show.