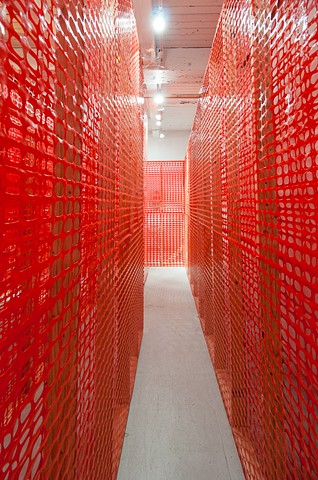 What if we thought of our buildings as sculptures?

If we saw buildings as art and not merely shelters, perhaps we would think twice before dismantling a weary structure on the West Side of Chicago and leaving an empty lot in its place—an open wound in the city surface, bandaged with orange plastic fencing to keep out trespassers until the time is ripe for redevelopment. In Start Together, Jaclyn Jacunski creates a sculpture built from the raw lumber of new construction and shrouded in the gaudy, neon netting that warns of displacement and gentrification, an all-too-common sight on Chicago’s West and South sides.

Whether on hunting vests or at construction sites, safety orange’s vivid hue shouts danger. Wrapped around a timber-frame labyrinth, this temporary fencing takes on new visual and tactile properties. As its density ebbs and flows across the taut surface of the studwork, it filters light and layers color like the crosshatch shading of a drawing or the warp and weft of fabric. In other works, Jacunski has woven strips of earth-dyed fabric through the structure of a chain-link fence. The cloth, colored from natural materials found on the empty lots that these fences surround, correspond obliquely to the many skin tones of Chicagoans. Woven through the wire grid, these patterns resemble the census maps that reveal the city’s notorious segregation.

Start Together strikes a more optimistic tone with its title, so perhaps the orange speaks of celebration, not caution. Certainly, it stands for visibility, like the kind that protesters seek when marching in the streets, demanding rights and recognition. In her drawings and zines, Jacunski weaves protest slogans from the past and present into patterned grids. This cacophony of chants and demands recalls the fabric of protest, as individuals weave together in public spaces to make a statement stronger than the sum of its separate threads. Like protests, fences separate, but they also unite. In Chicago and elsewhere, protestors are often confined to fenced-off areas called “free speech zones.” These cage-like fences not only demarcate the spatial limits of public protest but also bring together protestors who share societal concerns.

What if we thought of our bodies as architecture?

Linked arm-in-arm, a mass of bodies acts like a fence. With spines of steel, it resists displacement as it charges forward. Like a fence, it makes its own space. The vitality of a movement comes from its ability to transform itself as it transforms people. Moving through the glowing labyrinth, shapes and textures shift constantly around you. You are a body in a crowd, and each step creates a new space, a new perspective in an ever-unfolding world. -Elliot J. Reichert